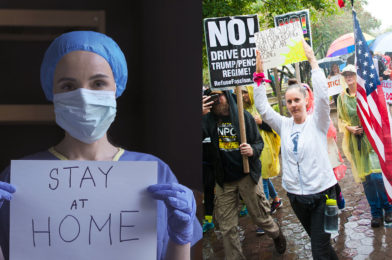 I read this meme that said something like, ‘me, looking to see what chapter of Revelations is next.’

It looks like Coronavirus is on its way out. And besides the Black Lives Matters protests, which I will discuss in a bit, there are several anti new world order and COVID is a hoax protests going on.

# 2020vision Repost @freedom_faction ・・・ Activists of the new political movement “#OrangeVests” (#GiletArancioni) protest during a demonstration against the #Italian Government for the economic problems the country is having due to the #coronavirus pandemic as phase two of the lifting lockdown exit plan continues on June 2, 2020 in #Rome, Italy. 🖐🏾More in comments👇🏾

In Italy and Ireland there are multi protests going on.

Just one of many protests in the Dublin City centre 📢

Step back and look take these little pieces and put them together. Bill Gates and his cronies had this convention in November called Agenda 201, which executed a mock demonstration of the exact events that are going on right now, the pandemic being the epicentre of the global agitation. They called it a ‘pandemic exercise’.

Some might find all this global new world order stuff surprising, but people, it’s been going on since Babylonian times. Not to get Biblical (I stradle the line between atheism and Gnosticism, with a dash of spirituality), but this shit is getting real. Even I’ve been paging through Revelations. Holy shit!

I digress. Gates ran this Event 201 and a few months later this virus escaped from a lab in Wuhan, China triggering the pandemic that was powerpoint presented. Remember they said a kid was playing in a cave when the bat came out and somehow gave him coronavirus? We all laughed. Well, only Bill Gates and his 1% Illuminati pals are laughing now, which is odd to me, because Satanists don’t seem like happy people.

So every government politely forced us to stay inside. Well, some countries like Brazil didn’t give two fucks, so they kept the party going. But Europe, to North America, Asia, Australia and even Russia made their citizens close shop and endure the cruelty of staying at home. Cruel because no one really had a choice. And…if you defied the ‘law’ you were called out as a monster who didn’t care about the old people dying in nursing homes. Remember that? Remember last month?

Also, remember the time healthcare workers were taking quirky selfies and make hilarious TikToc videos? Still reminding us to wash our hands, cover our faces and stay home so that we avoided murdering people with our germs.

Woke up to this message and my ❤ is filled with so much love and appreciation. Thank you @mgm927 #donatedcakepops #donatedtoHUMC #appreciationcakepops #frontlineworkers #healthcareworkers

A post shared by MNIEVESCAKEPOPS TREATS NJ (@mnievescakepops) on Jun 6, 2020 at 6:11am PDT

Fast forward to this past week, also known as June. From May to June the narrative made a radical turn. On May 25, a Minnesota man named George Floyd was allegedly murdered by a cop in full public view. Oh yeah, Floyd was black and the cop is white. So everyone got upset, which is justifiable. That resulted in a global race war. There were peaceful marches on the streets that were taken over by Black Lives Matter and ANTIFA.

Many black people were left without their small businesses because of #antifa , but they are not a #terrorist organization. #memes #blacklivesmatter #alllivesmatter #sjw #virtuesignaling #whiteguilt #whiteprivilege #blm #intersectional #influencer #feminists #gendergap #wecandoit #snowflakes #terrorism #antifa

If you want to know the truth, read books like Behold a Pale Horse. I first heard of the publication from a black friend of mine. He said it opened his eyes to how the global elites are the ones pulling the strings, include the race wars, the global catastrophes…and this was mentioned to be a few months ago.

I want to dedicate a post or two about this book. I already knew most of what William Cooper wrote about, but it solidifies and reaffirms the Illuminati’s plan for world domination. Now, I know that sounds insane, and a few years ago I would have also laughed it off. But I was a journalist for 20 years and was privileged to meet people who are on the inside. I was privy to information that I have to be careful to repeat. I can never reveal the names of these individuals. And if that discredits me, so be it.

Cooper wrote the book after working in the military. He had a high-security clearance. When he read these documents and knew what the shadow government was…is doing, he fucked out of there and tried to get this information out to the public. But as you can imagine, the government didn’t appreciate that and they shot and killed him. Too bad we couldn’t start a movement for him. I would have protested that.

Insanity to think this book was published in the 90s. It’s a doom book that should be read by every person, certainly in America and Europe.

I had to get off Facebook for a while. The same people who were rabidly shaming anyone who questioned the pandemic and wanted to open up businesses and gather, some of them even protesting, were online bullied and called lovely names that I cannot repeat. Remember all the cell phone warriors who filmed their neighbours having BBQs?

Those SAME individuals are now telling us that we can’t stay silent about George Floyd, that we have to march out on the street, perhaps do a little property damage and looting, and this will somehow make everyone not racist. And get this….those same TikToc happy healthcare workers who implored us…demanded that we stay in our homes to help them combat COVID-19 related deaths are now marching with Black Lives Matters in what they call ‘solidarity’ to the cause.

I am a person of colour. Floyd’s death, if it wasn’t a staged occurrence, is absolutely awful. But bullying people into ‘saying something’ and posting black squares on social media is not even close to building bridges. It isn’t even helping black people. It’s actually causing more hatred and agitation. Why? Because the majority of blacks in America are killed by other blacks and sometimes even Latinos. But the percentage of white on black crime is actually low.

This lady knows. Notice how she was attacked by an angry white lady. So I guess maybe we do need to work to defeat our prejudices.